History of the Monastery

The monastery was founded in 1115 by Duke Vladislav I, who was buried here in 1125. Initially it contained a Czech monastic community, which was expanded in 1117 from Zwiefalten in Swabia. The convent buildings were originally wooden, and it seems they were replaced by a stone Romanesque church around the beginning of the second half of the 12th century. An untypically deep choir with side chapels and a triple apse developed in the first stage, influenced by Norman models, followed by a transept (with two towers projecting from its eastern wall). In the second stage (during the first third of the 13th century) a long triple-nave basilica was erected. 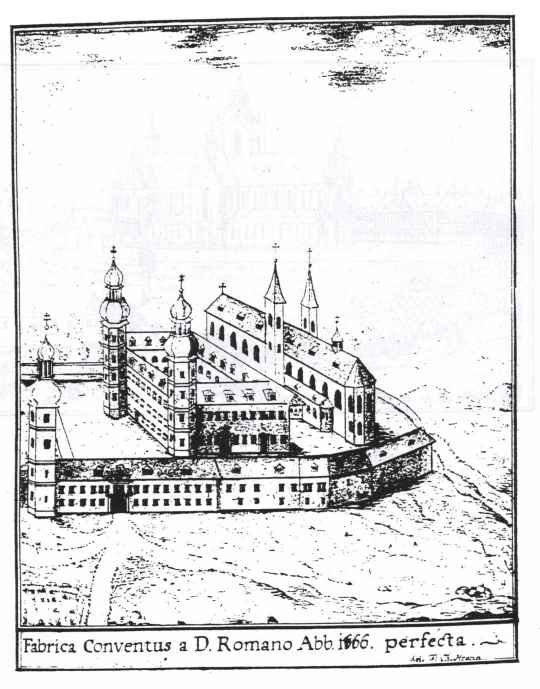 The church was consecrated in 1233, and was apparently the largest church in Bohemia at the time. The elements that are preserved are: the wall of the southern side nave; the southern part of the transept; the lower section of the northern side walls; the core of the inter aisle pillars and a fragment of arched frieze, as well as a walled-in Romanesque window in the cock-loft of the cloister, in the corner between the transept and southern nave. In 1279 the cloister was pillaged; repairs followed only from 1306–18. In the 1370s it was newly fortified, a Gothic apse was developed in the choir of the church (or perhaps just before 1504?) and the exceptional All Saints chapel (apparently on the site of an earlier one that had been there in the 13th century).

The monastery was damaged by the Hussites in 1421 and again during a siege of the Hussite garrisons by the troops of Sigismund of Luxembourg. Only in 1435 was it restored. In the 15th century, and first half of the 16th century, the church and cloister area were renovated (church consecrated in 1504, however the vaults were not renewed) and the monastery was expanded south of the existing fortifications to include farmyard buildings, a brewery and Latin school. However in 1590 a great fire broke out, consequently in 1598 the church was in part newly vaulted, but the buildings were damaged again during the Thirty Years War. After this, in the years 1653–6, the church was repaired (becoming a pilgrimage site from 1658). From 1664–70 a new Early Baroque convent and abbey (old prelature) were built around two inner courtyards and the All Saints chapel was rebuilt. By 1700 the new abbey was complete, as well as a guesthouse and main gate. From 1712–26, under Abbot Maurus Finzguth, the church was rebuilt to the designs of Jan Blažej Santini-Aichel in his distinctive Gothic-Baroque style (including a new trifoliated apse, the triple nave shortened by one bay, and with a high cupola above the transept replacing the Romanesque twin towers). Today the church is 82 metres long and the furnishings as a whole date from 1720–32. In 1728 the tombstone of Duke Vladislav I was erected in the church, with sculptural decoration from the workshop of Matyáš Bernhard Braun. From 1729–39 a monumental new convent was built (Kilian Ignac Dientzenhofer, finished finally in around 1770) and alterations to the monastery gardens followed.

In 1785 Emperor Joseph II dissolved the monastery and its furnishings were mostly sold off. The buildings were used subsequently in varied ways, for example as a hospice (from 1798), barracks (1800), infirmary, barracks again, military hospital (from 1818). In 1825 Prince Alfred I Windischgrätz bought the complex, but he only used it occasionally. From 1863–4 a brewery developed in the new convent and in 1874–86 the abbots‘ mausoleum was changed into a family tomb. The other buildings were converted for the administrative needs of the estate and altered in a utilitarian way. A fire in 1875 damaged part of the New Convent and destroyed all the Baroque roof structures. After 1918 the Windischgrätzs built a large library in the New Convent, to include their family archive (the library has been preserved intact, including family portraits). Provisional and salvage repairs to the dilapidated buildings took place in the first half of the 20th century.

However in the latter half of the century a large part of the complex fell into severe disrepair again and is being gradually repaired. Apart from the above-mentioned historic interiors in the old prelature there is an exhibition on St. Jan Nepomucký, and on the first floor (in what were the abbot’s quarters) a reception room, library (with portraits of Bohemian archbishops and other church dignitaries), abbot’s dining-room and his bedroom. Original Baroque sculptures from the workshop of Matyáš Bernhard Braun have been stored in the New Convent since the 1980s; they come from the Valeč gardens.

This link leads to a page which, sadly, isn't available in your language. Do you wish to continue?